As a versatile utility dog, the German Shepherd Dog breed has several different "types" that have their own origin, history and unique traits. These different types, although all of them are still German Shepherd dogs, can be better suited for different purposes and roles. Each type is valued and respected for what it brings to the breed.


All of these types of German Shepherd dogs within the breed are unique for a variety of reasons. Physical appearance, drives, temperament and purpose varies among the lines, but all of them are German Shepherds equally. 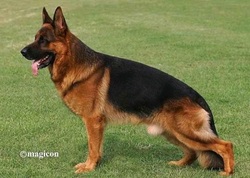 WEST GERMAN SHOW LINES
The most popular type of GSD in Germany, the West German show lines are bred to conform to the SV standard which also requires the dog to gain health clearances for hips and elbows and a working title (often herding or IPO) along with their show title prior to being bred. The "look" of this type is very specific and typically very uniform, most commonly presented as a black and red saddle back. 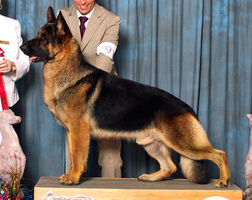 AMERICAN / CANADIAN SHOW LINES
Popular in North America since the 1970's, the American and Canadian show lines dominate the national kennel clubs and are intended to conform strictly to the standards set by each of the governing kennel clubs. Conformation and the side gait is what this type is passionately bred for. 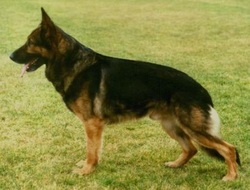 WEST GERMAN WORKING LINES
The dogs of West German working blood are often said to be the closest of all types to the original dogs produced under Max von Stephanitz. Focus is given to correct working structure, solid temperament and especially to correct, strong working drives and ability. West German working line German Shepherds excel in many different sports, real working jobs and positions of service. Like every German Shepherd should, they also make phenomenal active family pets. 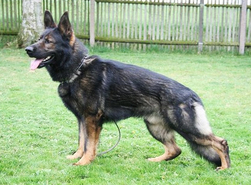 DDR / EAST GERMAN WORKING LINES
Developed after World War 2 from the remaining war dogs, the DDR / East German dogs were maintained strictly by the government of East Germany. Rigid control of the original DDR bloodlines resulted in a very distinct look. Best known for their typically correct working structure, large heads, large bone and dark pigment. The DDR bloodlines are also known for being very sound dogs, though working drives can vary. Older DDR bloodlines are valued for their phenomenal genetics and temperament. 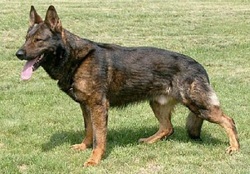 CZECH WORKING LINES
Originating in the communist Czechoslovakia and built on a foundation of working dogs used primarily for border patrol work, the Czech bloodlines are dominated by dogs who have a foundation of popular border patrol dogs and Czech military dogs. Unique to the this type, the original breeding of Czech dogs revolved around the Czechoslovakian Army’s Pohranicni Straze kennel. Some of the czech bloodlines contain phenomenal working drives and tend to be intense, agile working dogs.

- The following section was written by Christine Kemper of Blackthorn Kennel.

"In general, the DDR (East German) dogs are typically low to medium prey drive. They often have shorter, blockier builds and heavier bone and strong heads. In the past 25 years (since the Berlin wall fell in 1989), they have been bred for looks (but not the conformation ring) and temperament (the temperament that the breeder wants--whatever that may be)--but not so much working ability (not for success on the sport field). They often retain some of the strong, old territorial and defensive instincts and usually have very good noses/tracking and hunt drive. They tend to be handler soft/sensitive and very attached to their family and aloof with strangers. There are some dogs who are stronger in working ability, but if these dogs are bred poorly and raised poorly they can be low drive and nervy.

Czech dogs, following WWII, were based mostly DDR bloodlines, because during the time of communist East Germany and communist Czechoslovakia, breeders were able to exchange dogs and bloodlines much much easier than they were able to get German dogs. Building from similar foundation dogs, the Czech dogs were typically bred for military and police work--they were nasty dogs to strangers, meant to guard borders and intimidate. They tend to have longer legs and more slender bodies than the DDR dogs. When Czech dogs first started being imported in the late 1990s, a lot of really bad dogs came over--lots of bad hips and elbows and sharp temperaments. These dogs could be very handler hard and very high prey--or not.

In the last 20 years, the breeders in the Czech Republic and Slovakia (now 2 countries) have been breeding for a different type of dog. You are seeing more and more German and Belgian dogs being introduced to improve prey drive, trainability, and sociability--and hips. Today's Czech dogs, bred right, can bring a great balance of prey and defense and handler bond without losing hardness to the decoy.

The German dogs split into 2 distinct camps -- those bred for success in the show ring and those bred for success in the working arena (schutzhund/IPO). Show-line dogs can still succeed in titling, but the goal behind each breeding is to get a dog who will succeed based on how the dogs look and move in the show ring--NOT on how the dogs work, behave, or train. The German working lines--20 years ago and today, are bred for high prey drive, high retrieve drive, high trainability, and low defense/territorial drive. Hardness varies quite a bit -- from very hard to very soft. Generally they are reliably sound as far as hip/elbow production. Generally, they get along well with people in a variety of venues. Generally, their prey aggression is much higher than defensive aggression. Usually, they have very good "fight drive" (which isn't a drive, but a combination/reaction when a dog has good prey and defense and it channels well). Often bred to be very easy to train, very easy to trigger into reaction by a decoy. Tend to mature faster, come into full drives (especially prey drive) younger. Almost always excellent retrieve drive. "